The importance of recognition at work

Recognition is a powerful tool for motivation and engagement. Understand why.

Written by Michelle Garcia
Updated over a week ago

Recognition is an essential tool for building amazing corporate cultures.

Although a lot of companies are aware of it, most do not create rich environments concerning recognition. In the US, according to Gallup, more than a third of the workforce says they have not received any recognition in the past seven days, and according to Globoforce, only 14% of companies provide their leaders with tools and resources to praise their employees.

A survey by McKinsey, the worldwide management consulting firm, found that recognition - that is, praise from leaders and colleagues - is more effective than cash bonuses to boost motivation at work.

The role of the manager in recognition

One of the most important levers of recognition is praise coming from the direct manager, who is close to the work of each member in his team.

A study by the US consulting firm Towers Watson found that employees who are often recognized by their managers are almost 70 percent more engaged than their peers who are not recognized: 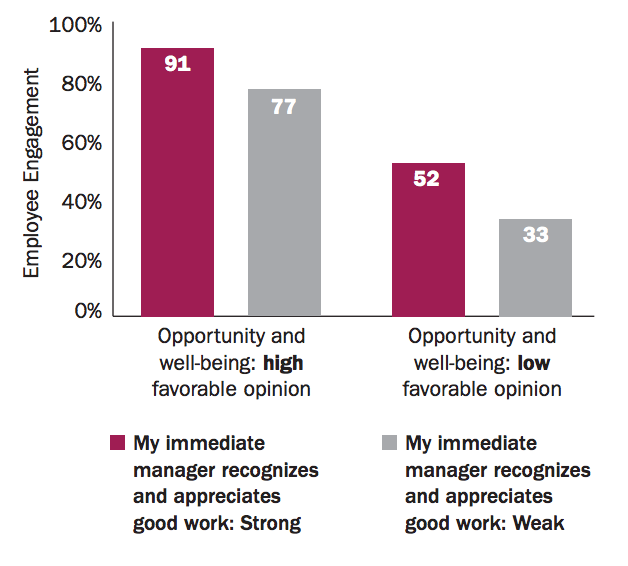 The importance of the manager’s role gets even more clear when one sees that it impacts most employees at companies in which there is less sense of opportunity and well-being, as we can see in the chart above, also by Towers Watson.

The role of peers in recognition

Not only managers play a relevant role in recognition. According to a SHRM study, companies with peer-to-peer (also called p2p) recognition programs are 35% more likely of having small turnover figures, and 41% of companies with these programs perceive improvements on their rates of consumer satisfaction.

So are you aware of the importance of recognition?

Did this answer your question?